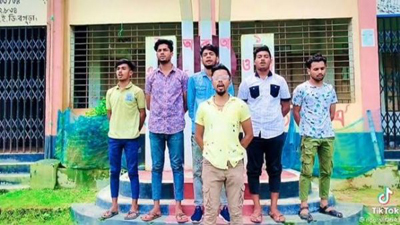 For making a video on a social media tic tok the national anthem has been blasphemed in Bogura.

He said a video circulating the tictok showed some youths standing in front of the Shaheed Minar at a government primary school in Bogura district, distorting and mocking the national anthem of Bangladesh.

Selim Reza fielded a team of police led by SI Zakir Al Ahsan of Sadar Police Station after receiving the message. They identified the culprits and conducted an overnight operation on Monday and arrested five people from different parts of the district.