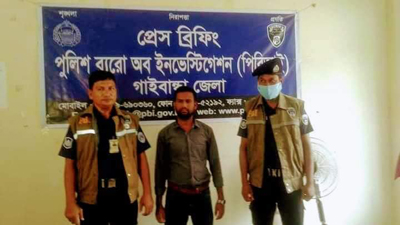 Members of Police Bureau of Investigation (PBI) have rescued a man allegedly killed in a murder case after being abducted in Gaibandha after 20 months.

Police super of PBI Gaibandha ARM Alif PBI disclosed it in a press conference of PBI at Gaibandha office on Saturday afternoon as the main focal person.

After briefing the media men by Police super Alifit is known that Wasim Jahan Towhidof Neezpara village under Ramjibon union of Sundarganjupazila made a love affair with Jannati Begum, daughter of Jahidul Islam, of nearby Subarna village under the same union of the upazila. A

t one stage, their relationship developed more and Jannati Begum became pregnant.  When the matter came to the light, the locals particularly the men of Jannati created pressure on Wasim Jahan to get marry Jannati Begum.

In course of time, the locals set aside the issue through solemnizing their marriage. After marriage, Wasim demanded an amount of dowry from his father in law.

When his father in law denied to pay the dowry to his son in law, Wasim Jahan sent his wife to her father’s house forcefully.

Following the matter, Jannati Begum filed a case with the Sundarganj court on December 08 in 2019. Since then,Wasim Jahan went into hiding.

Then, Manzumul Huda, older brother of Wasim filed a case against Jannati and other 7 members with Sundarganj court. In the case, Huda said, his brother Wasim was kidnapped by the men of Jannati.

Taking the matter into cognizance, the court on January 30 in 202o ordered the PBI of Gaibandha to investigate the matter seriously and to find out the clue of the case.

After long investigation a team of PBI led by inspector AbdurRazzakwere able to rescue Wasim who was allegedly kidnapped and killed by Jannati and her associates from a factory located at Mogarkhal area of Gazipur district onAugust 19, 2021.

Today Wasim would be produced before the court, police super said adding that Wasim used to work at various factories. A number of police official of the PBI were present during the press briefing.