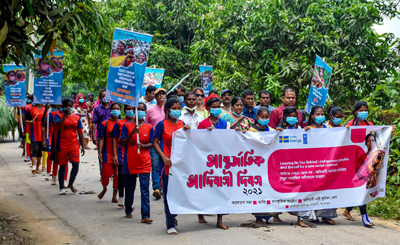 International Day of Indigenous Peoples was celebrated in Ghoraghatupazila under Dinajpur district amid much enthusiasm and festivity.

This year’s theme of the day was “Leaving no one Behind.”

Marking the day Abalambon, a social voluntary organization of Gaibandha district chalked out the elaborate programs from August 09 to August 11 in Gaibandha and Dinajpur district through the active participation of the indigenous people from all walks of life under Human Rights program funded by UNDP and Swiss and Sweden Embassies.

On Friday, a gathering was also held on the ground of Kalupara under Ghoraghatupazila in Dinajpur district.

The Santal community are always struggling to recover their lands used by their fore fathers, they cannot use the land easily to boost production of agri crops for their livelihood.

They demanded of the government to form land commission of the indigenous people to enjoy the ownership of the land to set up cultural academy to protect their heritage and their mother language.

At last, a charity football match was also held on Kalupara ground. In the match the indigenous girls participated in the match with festive mood.

A large number of indigenous people coming from far flung areas of the district attended the programs.