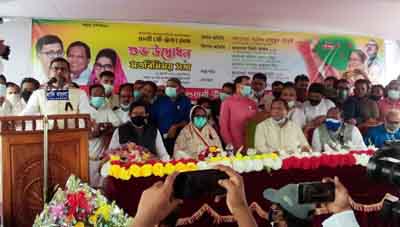 If the Jamuna Corridor project is implemented, the bond between the people on both sides of the Jamuna River will be further strengthened. There will be various institutions including educational institutions and hospitals. The land lost in the river will be restored. Plans are being made in that light. One and a half thousand crore rupees has been allocated for this project in the survey sector alone.

He further said that development is being achieved in all sectors under the able leadership of Sheikh Hasina. Many countries, including China, South Korea, the Netherlands and the United States, have expressed interest in investing in the maritime sector as deep-sea ports, pigeons and matarbari have been built.

With the launch of Sariakandi Madarganj C-Truck Service, the dream of the late Abdul Mannan MP is being realized. He was speaking as the chief guest at an exchange meeting at Kalitala Ghat organized by Sariakandi Upazila Awami League on the occasion of inauguration of Sea Truck Service on Sariakandi-Jamalpur Madarganj route in Bogura on Thursday noon.