In the operation of RAB-12, 1 truck including 03 people with fencidil was seized at Sherpur in Bogura 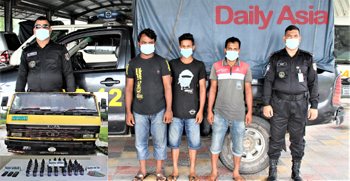 Since its inception, the Rapid Action Battalion (RAB) has been playing a leading role in bringing all types of criminals under the purview of the law with a view to maintaining the overall law and order situation in the country. The RAB has been conducting regular raids to nab militants, terrorists, organized criminals, kidnappers, gamblers, drug dealers, murderers and kidnappers in various sensational cases.

Following this, at 01.35 pm on 08/08/2021, on the basis of secret information, a vigilante expedition team of RAB-12’s Sadar Company carried out a temporary checkpost on the Dhaka-Bogra highway in front of the Dhaka bus stand at Sherpur under Sherpur police station. The drug dealer was arrested. At that time, 5640 / – (five thousand seven hundred and forty) rupees used for buying and selling drugs, 01 truck (whose registration number is Dhaka Metro-T-13-6125) and 03 mobiles were seized from them.

The arrested drug dealers were handed over to the Sherpur police station of Bogra district along with the recovered evidence while filing a case under Section 13 (b) / 41 of Table 38 (1) of the Narcotics Control Act, 2016.

Preliminary interrogation revealed that these drug traffickers had been buying and selling illegal narcotics in different areas of Bogra district for a long time under the guise of law enforcement agencies.