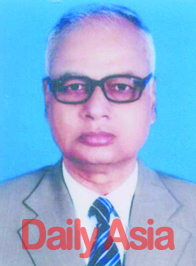 His Excellency the President of the People’s Republic of Bangladesh and Chancellor of the University Private University Act-2010, Section 31 (1) Distinguished Academician, Retired Professor of the Department of Applied Physics and Electronic Engineering, Rajshahi University. Md. Mozaffar Hossain has been appointed as the Vice-Chancellor of Pundra University of Science and Technology, Bogra for 04 (four) years.

After completing his education, he joined Rajshahi University in 1989 as a Lecturer in the Department of Applied Physics and Electronic Engineering and from 1989 to 1994 he served as Lecturer, Assistant Professor and Associate Professor. He taught as an Associate Professor at the University of Salahuddin, Erbil, Iraq from 1989 to 1990. From June 1994 to 2020, he served as Professor with distinction. In addition to teaching, he was the Provost of Syed Amir Ali Hall of Rajshahi University from 1994 to 1996, Founder Chairman of ICE Department from 2000 to 2003, Chairman of the Department of Applied Physics and Electronic Engineering from 2004 to 2006 and General Secretary of Rajshahi University Teachers Association from 1994-1996. -95 Rajshahi University City Club General Secretary and other important administrative duties. He successfully served as the Vice-Chancellor of Pabna University of Science and Technology from 2009 to 2013. He is also a Life Member of Bangladesh Advance of Science, Bangladesh Physical Society, World Forum on Advanced Materials and a Fellow-Member of New York of Science.

He has been teaching and administering for 41 long years and is credited with various research works. So far, he has published 03 important books on electronics and more than 40 research articles on various related journals at home and abroad.