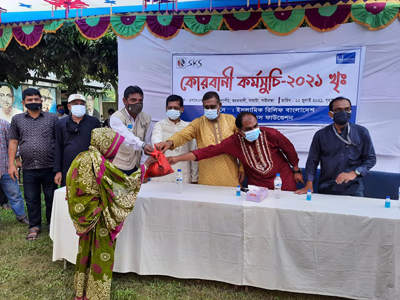 A total of 3325 distressed, river eroded and disable families of 12 unions under Shaghata and Fulchhariupazilas in the district got sacrificial meat from a local reputed non-government organization.

ShaghataUpazilaParishad chairman Md. ZahangirKabir attended the function and addressed it as the chief guest and representative of IRB Md. Selim Reza, coordinator on Social enterprise of SKS Foundation Abu Sayeed Sumon, Bharatkhali union parishad (UP) chairman Md. Shamsul Azad Shital, Shaghata UP chairman Mosarrof Hossain Sweet were present at the event as the special guests while assistant director (field operation) of the organization KhandakerZahidSarwar presided over the ceremony.

The speakers in their speeches thanked the IRB for standing beside the distressed and river erosion victims of the upazila with sacrificial meat to help them celebrate the Eid-ul- Adha, the greatest religious festival of the Muslims.

Coordinator on Social enterprise of SKS Foundation Abu Sayeed Sumon in his speeches said the organization had been conducting for 10 years last such type of activity for the poor who have no ability to purchase meat due to their poverty at any events including the Eid one.

The organization continued the activity for 12 years and the efforts for the distressed and the river erosion victims of the upazila would continue in future, he expected.

Later, the guests formally distributed the meat to the selected families of the upazilas in the district. Each of the families received 2 KGs of sacrificial meat.

After getting the meat, the beneficiaries are happy and expressed their satisfaction and gratefulness to SKS Foundation and IRB for standing beside them with sacrificial meat to help celebrate the Eid-ul-Adha peacefully.

Chief executive of SKS Foundation Rasel Ahmed Liton told the BSS that as many as 95 animals (oxen ) received from the IRB were sacrificed under the QurbaniProgramme of the organization this year.