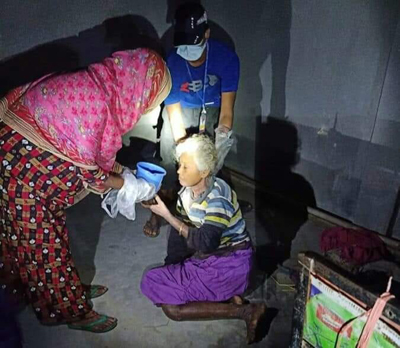 UNO may have heard his plea in the glory of the Creator. The sick is a nameless woman without identity, lying sick for 3 days in an abandoned godown area in Paglar lane area of ​​Sapahar upazila of Naogaon.

She became more ill due to not eating and drinking properly. She did not have the strength to move. She had abandoned human waste there due to lack of knowledge and physical weakness. As a result, the clothes worn are ruined. The stench spread around. There were no relatives or people to stand by. 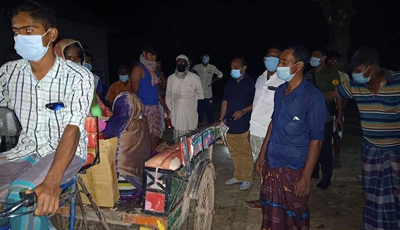 UNO came to know about the miserable condition of this woman and she was rescued from the abandoned godown. UNO hired a local woman to take care of the rescued sick woman.

The UNO brought his wife’s clothes and food from the house to the naked woman as the shop was closed due country wide prolong lockdown.

Later she was admitted to the Upazila Sadar Hospital for treatment. UNO Mamun  went to the hospital yesterday with new clothes for Geeta Rani to use and inquired about her physical condition and treatment.

After inquiring about Gita Rani, it is leart that she came to Sapahar Upazila about 5 years ago. She used to wander around in different areas losing his mental balance. 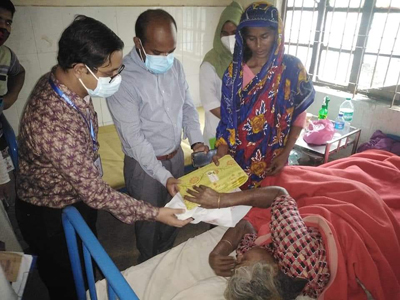 She came from Manda upazila. Though she posses some land but her relatives do not want to take her. She was married since she was Hindu. After leaving her husband and children, she converted to Islam and married a Muslim. At one point the husband divorced her.  From then on, Gita lost her mental balance.

Upazila Nirbahi Officer (UNO) Abdullah Al Mamun said he stood beside her from humanitarian responsibilities as a human being. If Gati Rani comes round completely, she would be sent safe home, he added.