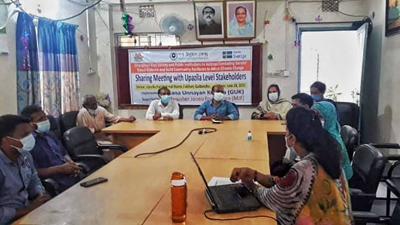 A project entitled “Strengthening Civil Society and Public Institutions to Address Gender Based Violence and Build Community Resilience to Adapt Climate Change (CCA & GBV)” is being implemented at Fazlerpur and Urya unions under Fulchhariupazila in the district from 2014.

The objective of the project to cut the poverty of the river erosion affected people living in the unions.

Very recently an experience sharing meeting between the upazila level govt. officials and the leaders of the organized groups formed by the project was held at the conference room of FulchhariUpazila administration in the district on June 28 with UNO Abu RayhanDolon in the chair.

The overall activities of the project were presented by project coordinator Tania Tasmin while programme manager JoyaProshad moderated the function.

Many of the upazila level officials and invited persons delivered their speeches in the meeting.

The speakers in their speeches underscored the need for ensuring the government services to the affected people to change their socio economic conditions gradually to build a prosperous country.

UNO Abu RayhanDolon in his presidential speeches said an emphasis should be given to find out the problems of the poor on priority basis and how to solve those without delay through united efforts of all as the development of the country is not possible without changing the lots of the people at grace root level.

The UNO also urged the upazila level officials to be more serious and dutiful to provide their respective services to the people of grace root level properly so that the people are not harassed and hurt to get services from the officials.