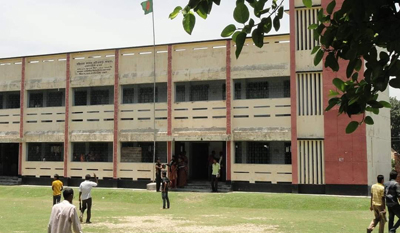 Fighting has started in the area as a managing committee was secretly formed at Chaikola Degree College, a traditional educational institution in Chatmohar, Pabna.

The situation escalated when angry parents and locals went to the college premises on Saturday (July 10) to question Principal Saiful Islam in protest of the incident. Later the police came to the spot and brought the situation under control.
Locals including Soleiman Hossain, a member of the defunct committee of the college, Golzar Hossain and Setar Hossain of Chaikola village said that the term of the managing committee of Chaikola Degree College ended on July 9.

After the collection, submission and selection of nomination papers, the guardian member candidates cast their votes. Returning Officers and Presiding Officers were also appointed for this purpose. If the election for the post of teacher representative was to be held according to the same process, Principal Saiful Islam did not follow these procedures and secretly formed a committee with the people of his choice and got it approved.

No student parents or teachers know about voting. The principal has formed this committee with complete irregularities. When the news of the secret formation of the committee spread in the area, the parents and the locals became angry and demanded the cancellation of the committee. Teachers’ representatives Saimur Rahman Pavel, Hasinur Rahman Ujjwal and other teachers said that we do not know anything about the formation of the new committee.
In this regard, Principal Saiful Islam said that there was no need to vote for the formation of a new managing committee. I have formed the committee in accordance with the rules and regulations. As there was no rival candidate, Ramiz Uddin, Saiful Islam and Bablur Rahman were elected unopposed as guardian members. SM Mizanur Rahman, Shariful Islam and Jiban Nesa were elected unopposed as there was no rival candidate for the post of teacher representative. Abu Tayyab Mia has been elected as a donor member. We have recently formed a new committee with former president Abbas Ali Master as president.

Fahima Sultana, college inspector of the National University, said there was no opportunity to form a committee without informing the students, parents and teachers. If this has happened and any complaint is received in this regard, legal action will be taken.