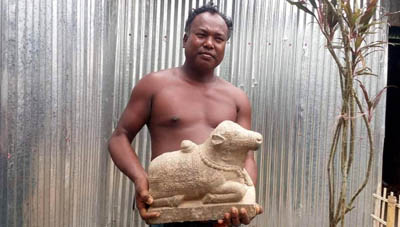 A 200 years old cow statue recovered from Goshaiyer Vita under Nageswari upazila in Kurigram at noon on Friday.

Locals said some Hindu communities including Provash,Sree Dhar and Parimal were collecting burning bricks and stones from a decayed Jamidar House at Goshaiyer Vita at Sukhati under Nawasi union of Nageswari upazila of the district at noon on Friday and found a cow statue under bricks and stones.

The weighing of the statue at 20 kgs and 500 gram which was preserved in the house of one Provash in the village.

Hearing the news a good number of people gathered there to see the touch stone like the statue at a glance.

Local octogenarian Chanchala Bala told that we heard there was a Jamidah house at Gosaier Vita named Gosai 200 years ago. The village named after him. The statue of the house of that Jamida Bari, she said.

Later hearing the news police rushed there and brought the statue to Nageswari police station.