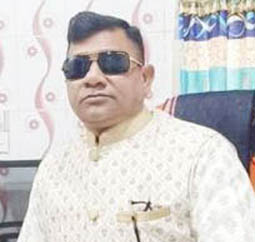 A team of the intelligence branch of police in Rajshahi arrested Muktar Ali, mayor of Arani municipality in Bagha upazila of Rajshahi from Pabna’s Ishwardi upazila on Monday morning.

A team of the intelligence branch of the Rajshahi district police conducted an operation and arrested him from Pakshi area in the Ishwarid upazila of Pabna at around 4.30am on Friday.

Police raided the house of municipal mayor Muktar Ali on Wednesday (July 7) in a case filed after a college teacher was beaten.

Four foreign firearms, Tk 94.98 lakh in cash and yaba were recovered from the house at that time. Then, sensing the presence of the police, Mayor Muktar Ali fled.

The mayor’s wife and two nephews were arrested at the time. Muktar Ali has been a fugitive ever since.

Bagha Police Officer-in-Charge (OC) Nazrul Islam said he was taken to his own house after his arrest. The police conducted another search there. During this time a large quantity of drugs was seized. He is being interrogated in police custody. Preparations are underway to take legal action.