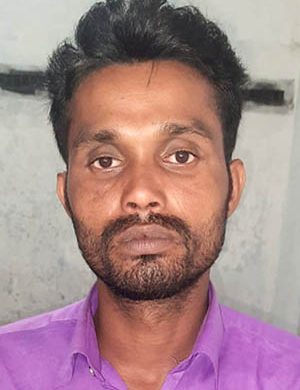 Police have arrested a scoundrel named Dalu Mia (30) in a case of attempted murder of a housewife in Dhunat upazila of Bogra over a land dispute. Dalu Mia is the son of Abdus Sohrab of Chhota Chikashi village in the upazila.

He was sent to Bogra District Jail from Dhunat Police Station on Thursday afternoon. Police raided the house and arrested Dalu Mia from his house on Wednesday night.

According to the complaint and local sources, there has been a long-running land dispute with Dalu Mia, a neighbor of Jamal Mia, son of Abbas Ali of Chhota Chikashi village in the upazila. In this situation, on the morning of July 2, Dalu Mia went to Jamal Mia’s house with his men and started abusing him. As he protested, Dalu Mia and his men started beating Jamal Mia.

At that time, his wife started beating him. At one point, they tried to kill the housewife by indecency and suffocation. Later, they vandalized the house and looted Rs 75,000 in cash. The housewife’s husband lodged a written complaint with the Dhunat police station that evening. Eight people, including Dalu Mia, have been charged in the case.

Dhunat Police Officer-in-Charge (OC) Kripa Sindhu Bala said a man has been arrested for allegedly molesting a housewife. Attempts are being made to arrest the other accused.