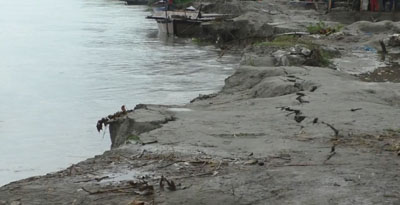 The devastating River erosion is goimg on at eight points due to incessant rainfall and onrush of water from upstream increasing water level of the mighty and gulping river Teesta which eroded more than 400 families landless and homeless within the last one week.

Several hundreds of cultivable lands, orchard, water body, pond, and two mosques were already been gone in the river bed.The river erosion hit victims took shelter in educational institutes as well as  their respective relative’s house and leading their lives in a great hardship.The sufferings of river side people know no bound.

WDB officials marked eight points of river erosion. Although they are trying to protect erosion throughingG.O.bags and G.O. Tube but fresh areas are being eroded changing motion of the river.Consequently, they markedmore than four hundred river erosion hit victims within the last week of five unions under Rajarhat and Ulipurupazila.

Although WDB officials have protected the erosion here throughing G.O. bags and G.O. Tubes but suddenly the erosion has been started from upper side here.UlipurUpazila Administration distributed food items and cash money among river erosion hit victims who lost the houses of 61 families of Gorai Par areas under Thetrai union within the last five days.

UlipurUpazilaNirbahi Officer (UNO) Noor-e-Jannar Rumi said some 61 houses of Gorai Pear villageunder Thetrai union washed away within the last week. Food Items and cash money have been distributed on behalf of the Government.

Executive Engineer of Kurigram WDB Ariful Islam said river erosion was in eight points of the Teesta River where we took necessary measures to protect erosion throughing G.O. bags and G.O.Tubes. But it is a problem that the river is newly eroding changing its motion. We sent a project proposal.After approval of the project the Teesta river side people will free from river erosion as well as flood.

Law Maker of Kurigram constituenct-3 Professor (Retd) M.A Matin said it is a temporary system.It is a problem of Ulipur for long. Adiministration is taking care at the sufferings of people.We are also following up, he added.