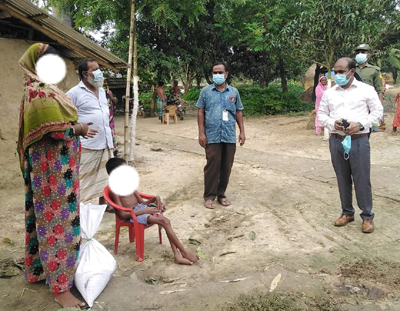 Humanitarian Upazila Nirbahi Officer (UNO) and Executive Magistrate Abdullah Al Mamun searched for the disabled child in the midst of hundreds of activities.

UNO has to work day and night to implement the government instructions for welfare of citizen. Along with government work, he searches for distress, fable and disabled people in the upazila.

Meanwhile, Upazila Nirbahi Officer (UNO) and Executive Magistrate Abdullah Al Mamun is the trusted name to the people of Sapaher upazila. Within very short time of his deploying as UNO in the upazila he has performed a lot of civil work.

While conducting the operation, Upazila Nirbahi Officer (UNO) Abdullah Al Mamun saw a disabled child sitting on the side of the road in Adalpur village on the way back to Sapahar Sadar from Hapnia Ghat area. He stopped the car and proceeded towards the child.

He called the villagers and his mother to find out if the child had any government benefits, and to inquire about his family’s financial situation. It is said that there is disability allowance in the name of the child. His father is a day laborer. Hearing about the family condition of the child, the upazila administration official handed over food items gifted by Prime Minister Sheikh Hasina to his mother.

The upazila administration has launched a campaign through regular mobile courts to make the people aware and ensure compliance with health rules. As pat of it four people were fined a total of Tk 2,700 in four cases by a mobile court led by UNO  on Sunday for negligence in enforcing strict rules and regulations.