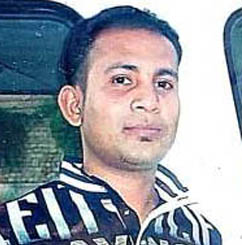 A young man sand trader was hacked to death by miscreants in broad daylight with a sharp weapon near his house at Ranchandrapur village in Pabna sadar upazila on Saturday noon.

The incident took place at around 2pm in 7 No ward area of ​​South Ramchandra under Dogachhi union in Pabna sadar upazila.

The deceased was identified as Sumon Pramanik,38, son of late Bakibillah Pramanik of Dakshin Ramchandrapur Mahalla and a local sand trader.

According to family sources, Sumon was attacked by miscreants on his way home from Ananta bazar in Pabna town.

After the incident, agitated locals set fire to the house of the murderers accused of murder. During this time, three houses were burnt down. Later, the fire service personnel tried to control the fire for an hour, Fire officials said.

Eyewitness Rima Khatun, wife of the deceased Sumon Pramanik, said that on his way home from Ananta Bazar in the district headquarter, her husband was hacked to death by the identified terrorists in the area.

They come to kill me when I try to stop them. The locals rescued him and took him to Pabna General Hospital where the doctor on duty declared him dead.

Extreme tension is prevailing in the area due to this incident. Additional police have been deployed at the spot.

According to family and locals, the deceased Sumon Pramanik was abroad for about 7 years.

After coming from abroad, he used to drive the car of Ali Hasan, the chairman of the local Dogachhi Union. He recently quit that job and started a sand business.

Bakul Sheikh, a councilor in the same area, was killed last year.

The deceased Sumon was a close friend of Bakul Sheikh. Locals speculate that the killings may have been linked to the Bakul killings.

However, the family could not say the exact reason for the murder.  It is unknown at this time what he will do after leaving the post.

The locals, including their families, demanded that the killers be arrested and brought under the law.

Additional Superintendent of Police Masud Alam(Crime) of Pabna district police said, “We are investigating the murder.” The killings may have been due to previous hostilities. Police have launched an operation to arrest the killers. Hopefully the accused will be brought under the law in a very short time.