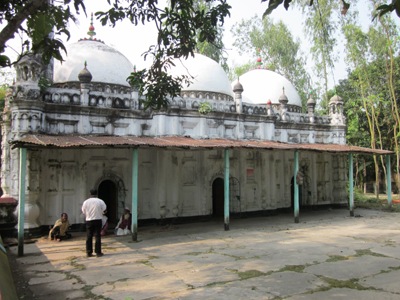 The Chandamari mosque witnesses of the archaeological design of the time of the Mughal era in the district. But the plaque of the architectural art of the mosque is in danger due to high salinity and lack of proper maintenance.

The mosque is situated at Chandamari (Mondol Para) village under Chakirpashar union of Rajarhat upazila of Kurigram district. None can tell the time of its foundation, several persons opined there.

No one could say the name of the person who had initiated its establishment and in the absence of any office of the department of Archaeology in the district; no effort has so far been taken to dig about the background and history of the ancient mosque.

During a visit of the site, local resident Abdul Jalil Sarker (53) and President of the mosque committee Jakir Hossain Chawdhury (58) said that it is really hard to discover the age of the mosque after passing of the fourth generation though many guessed that the mosque might have been built in the 16th or the 17th century. This mosque has similarities with the structure of Atia Mosque built in 1609 AD at Tangail. Ajahar Ali Mondol 60 the residence of adjacent of the mosque said the then Mughal emperor Babor built the mosque.

Local sources said that the area of the mosque and its outskirts is 52 decimals but the main building occupies five decimals of land only.    The length of the mosque is 40 feet and width is 20 feet. Two special windows and there are eight developed shelves in inner side. Per brick is in 25 inches mixed with viscous (locally known as shurki). There are three doors in five feet each and three beautiful Domes in the upper side and six small Dom are surrounded there. There are also six miners.

Imam of the mosque Maolana Md. Aminul Islam said the beauty of the ancient mosque is decaying due to lack of maintenance and renovation. If the building is not repaired once upon a time the mosque building may be collapsed and the ancient asset of our forefather will be erased.

In spite of disfavourable of the building, the Namaz in five times including Jumma prayer are being performed regularly. Local people said many people took snap of the mosque building and we applied to some government and non government organizations for financial help to repair the mosque but no one extended their helping hands till now.

Another same architectural mosque “Shahi Jami mosque” is also situated at Beparipara in Rajarhat  Sadar upazila in Kurigram which attracts to all.