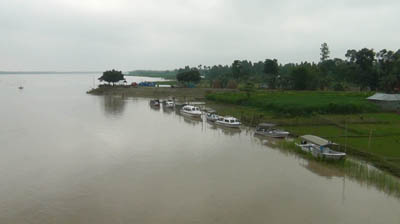 Incessant rainfall for the last several days and onrush of water from upstream are increasing water level of all the 16 rivers including the Dharla, Teesta, Brahmaputra, Dudkumar, Fulkumar, Gangadhar, Zinzeram and Sonavory. Low lying areas of these areas are inundated made like flood situation. 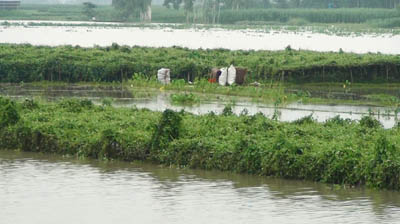 Many standing crops as well as vegetable fields went under water damaging partially or fully. Communication system of rural areas especially at char and Island char areas being hampered. With the incessant of water river erosion is going on in several points.

Momin Miah 35 of Sulkur bazar area under Panchgachi union of sadar upazila said my vegetable field on one bigha went under water due to incessant water of the Dharla River. If it continued the houses of low lying areas will be submerged fully.

Executive Engineer of Kurigram Water Development Board Ariful Islam said although water level of all the rivers are increasing but it is flowing under the danger level. If the rainfall continues, it may flow above the danger level. In addition, necessary measure is being taken to protect erosion prone area of the Teesta River.