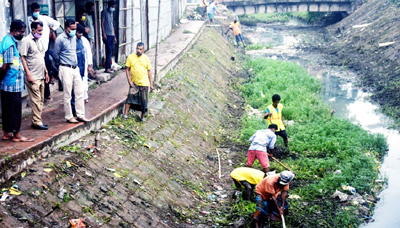 Rangpur City Corporation (RpCC) has started cleaning of the Shyamasundari Canal to maintain water flow, remove water logging, stop breeding of mosquitoes and improve the environment in the metropolis.

As per direction of Mayor of Rangpur Mostafizar Rahman Mostafa, Chief Executive Officer of RpCC Ruhul Amin Miah launched the cleaning campaign of the 16-kilometre long Shyamasundari Canal at the Check Post point on Thursday afternoon.

On the occasion, Ruhul Amin said the cleaning campaign of the Shyamasundari Canal was aimed at ensuring cleanliness for preventing the spread of Aedes mosquitoes during the monsoon season for the convenience of the people of the metropolis.

“The campaign will continue till the canal is completely cleaned,” he said, adding that successful implementation of the campaign will free the metropolis from water logging as well as ‘Chikungunya’, ‘Dengu’ and Malaria diseases.

He sought cooperation of all in making the cleanliness campaign a success for preventing mosquito breeding through maintaining cleanliness also to improve the city environment and reduce the extent of all mosquito-related diseases.