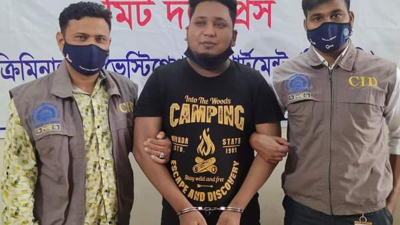 Police have arrested Sohan Mandal, 28, the main accused in the sensational Yasin murder case in Pabna sadar upazila and a member of the convening committee of the district Juba League.

A team from CID Pabna district arrested him on Thursday night.

The arrested Sohan Mandal is the son of Iman Ali Mandal of Bhajendrapur village of Pabna sadar police station. He is a notorious terrorist in the area. There were multiple cases against him including murders and explosives Act, police officials said..

Sohan Mandal hacked Yasin to death with a sharp weapon in broad daylight in front of his house after jumma prayers on March 20 last year over the appointment of a new muezzin at the Jame Mosque in Bhajendrapur village of Pabna sadar upazila.

Accused Sohan hit Yasin on the head with a Chinese ax and Yasin fell to the ground. Yasin succumbed to his injuries at Rajshahi Medical College Hospital. CID Pabna is investigating the case very seriously.

According to the locals, the people in the area were uneasy about the torture of Juba League leader Sohan. Whenever anyone spoke against him, he was tortured in a demonic manner. The locals have been demanding relief from his oppression for a long time. But even though no one was arrested invisibly, this time Sohan fell into the trap of playing the strong role of the present Superintendant of Police in Pabna.  Locals sighed at his arrest.