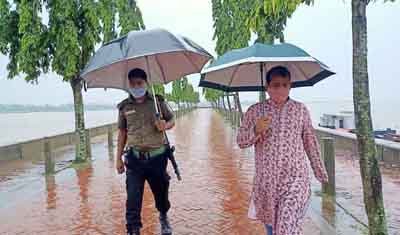 A mobile court operation has been conducted in different areas of Sariakandi in Bogura on Thursday to implement a strict lock-down.  Besides, patrols of army, police and Ansar forces are going on.

Upazila Nirbahi Officer Md Rasell Mia started the operation in different markets on Thursday morning. He also conducted expeditions on the Jamuna River at various ghats, including the Kalitala Ghat on the Jamuna River, to stop the movement of boats.

Assistant Commissioner (Land) Dewan Ekramul Haque has been conducting a mobile court since morning and fined the mobile court for keeping the shop open and moving out of the house unnecessarily. Keys to several motorcycles and mechanically driven vehicles were also seized. Sariakandi Municipality, Mathurapara, Barikandi, Kutubpur, Karitala, Jorgachha and other areas were visited and shops were closed.

Although one or two shops are open without exemption, fines are actually levied in the eyes of the mobile court. People who came out of the house had to face interrogation in the mobile court. As a result, lock-down is going on strictly in Sariakandi.