District police in hardline to implement strict lockdown in Gaibandha 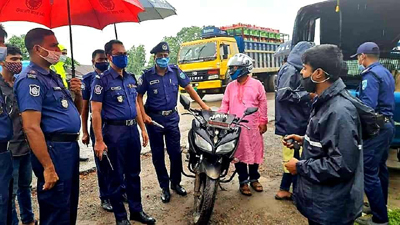 District police led by superintendent of police (SP) Muhammad Towhidul Islam are in hardline to implement the strict lockdown in all the seven upazilas of the district from today.

This was disclosed by SP Muhammad Towhidul Islam while he was exchanging views with the Specail correspondent of Daily Asia about lockdown to halt the spread of corona in the district over mobile phone this morning.

The government also issued a notification about the lockdownthat would continue till July 07.

As per the instructions of the notification public transport will be closed on road, rail and waterways alongside all types of motorized vehicles, he said adding that all shops including shopping mall or market will be closed and all tourist centers, resorts, community centers and recreation centers will be closed.

To implement the strict lockdown in the district properly, a large number of police forces led by police officers are on duty and patrolling the roads carefully he mentioned and said a number of check posts had also been set up on the roads.

As punishment, the accused might face fines or jail.

If any persons try to breach the safety rules of lockdown, lawful action would be taken through the mobile courts led by executive magistrate of district administration, he further added.

The SP also sought whole hearted cooperation of the people from all walks of life of the district in the implementation of strict lockdown imposed by the government to save the people from corona and to check corona infection as well.

In the morning, a number of police forces led by police officials were seen to patrol the roads in the implementation of the strict lockdown.