Gift house of PM collapsed due to light rain, trying to repair it with bamboo 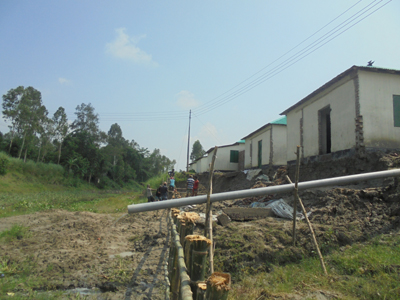 Five parts of 22 houses of a special gift given by Prime Minister Sheikh Hasina at Khanpur Union in Sherpur upazila in  Bogura on the occasion of Mujib Year have collapsed.

The rest are also under threat. Besides using less bricks, sand and cement than allotted, the locals are blaming the irresponsibility of the Upazila Nirbahi Officer.

According to the Sherpur Upazila Project Implementation Office, a semi-finished house is being constructed for 163 landless families in the upazila under the Prime Minister’s Priority Project Asrayan-2 in the fiscal year 2020-21 by allocating 2% khas land. The cost for the construction of each house has been estimated TK 1 lakh 71 thousand . Under this project, the local upazila administration is taking care of this work worth about three crore taka in Sherpur upazila.

Even after the inauguration of the first phase by the Prime Minister, not all the families have started living in most of the houses yet. The reason is that the houses have not been provided with electricity yet. The collapse of 5 houses has also caused panic among the residents.

According to the construction workers working on the project, the project has been fully supervised by the local UNO. When building a house, the soil is leveled from the side with an excavator ignoring the government policy.

As a result, with a little rain, the soil collapses and a ditch about 6 feet deep is created. At the same time, half of each of the five houses disappeared. Residents fear that the rest of the houses will collapse at any moment.

One of the beneficiaries, who did not want to be named, said that besides the administration, the residents have also tried to protect the houses with their personal labor and money. But it was not possible. It collapsed in just two days of heavy rain.

Khanpur union chairman Shafiqul Islam Ranju said he could not visit the area due to illness. So I can’t say the details about this.

Upazila Nirbahi Officer Md. Moinul Islam said, Public Health Engineer, PWD Water Development Board officials have visited the area. Arrangements will be made to repair and rebuild the damaged houses as per their advice.