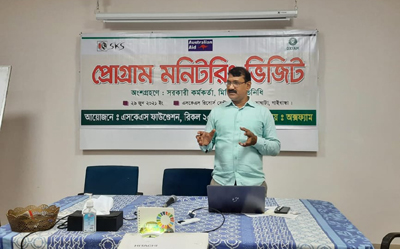 A welfare project namely REE-CALL (Resilience through Economic Empowerment, Climate Adaptation, Leadership and Learning) being implemented by a local reputed non- government organization SKS Foundation changed the lots of the erosion victims of Gobindi village under Shaghataupazila in the district through involving themselves in income generating activities.

After involving in income generating activity, the beneficiaries are happy and passing their days and nights without economic trouble.

The beneficiaries made the comments while exchanging views with the media men working in various media outlets of the country at Sanitary Napkin Production and Hygiene Center at Gobindi village under Shaghata union of the upazilaon Tuesday after noon.

Earlier, a briefing session for the government officials and the media men was held at the conference room of the head office of SKS Foundation at Bharatkhali of the upazila at noon.

Project coordinator Baharam Khan briefed the govt. officials and the journalists about the project and its development activities for the erosion victims.

After elaborate discussion, it was learnt that a large number of people lived at Haatbari, Bashhata and Purbo-Gobindi village of the upazila but most of them lived under poverty line and passed their days and nights with hardship. In a word, their sorrows knew no bound. At one stage, their homesteads with arable land were devoured by the river Jamuna. Many of them took shelter on the nearby flood control embankment and other higher places

As erosion victims had no alternative way to lead their livelihood, they suffered miserably for want of employment generation.

Taking this in view, a flood shelter center was constructed at Gobindi village and as many as 250 river eroded families took shelter there. For not having sources of income of the sheltered people, they faced poverty and could not afford the family expense for want of money.

Considering the sorrows of the sheltered people, local NGO SKS Foundation took a step to do something for them. Accordingly, SKS Foundation brought them under REE-CALL project funded by Oxfam GB.

Then the project started various works for the communities living in the flood shelter. The works included promoting wash activities and ensuring hygiene environment.  At the initiative of the project, women wash platform (wwp) was also formed. The members of the WWP continued to hold monthly meeting regularly. In the meeting, they discussed how to improve sanitation activity, personal hygiene especially menstrual hygiene and solve hygienic problems. Earlier the members of the WWP were imparted 3-day long training for building up their capacities so that they could brief and understand other women of the community aimed at promoting hygiene and wash relating activities properly.

In course of time, the project officials took a decision to set up Hygiene and Sanitary Napkin Production Center. To end this, the officials held meetings with the leaders of CBO (community based organization). After holding successful meetings and sharing the issue with the CBO leaders, the Foundation established Hygiene and Sanitary Napkin Production Center. The foundation also gave their commitment to provide all sorts of help and assistance from the project to run the center successfully.

After the establishment of the center, a number of energetic females were given job there.

Before joining job, all the staff of the center were imparted need base training at the direct super vision of the project so that they could manufacture the quality products in the center.

A many as 2000-3000 pieces of sanitary napkins namely ‘Sachetan Sanitary Napkins’ are being produced in the center every month.

The female staff of the project are also motivating the girls’ students of high school and colleges of the upazila to use sanitary napkins to keep fit physically so that the sanitary napkins produced by the center are sold.

The employees of the center are also inspiring the females of the communities and villages to use sanitary napkins.

In this way, the sanitary napkins of the center have gained much popularity to the adolescents and the women of the upazila.

As a result, a team comprising 6 female employees of the center is earning an amount of money ranging from TK 3000 to 45000.

For being involved in the center, the lots of a good number of erosion victims had been changed and they became self- reliant and were passing their without economic trouble.

On Tuesday, a program monitoring visit by the govt. officials and the media men at the arrangement of the project was held.

After talking to the employees of the center, it was learnt that all are happy and in good position. Many of them became self-dependent economically through cutting their poverty.

A good number of govt. officials and journalists visited the center