Outlawed gunned down in Pabna

An operative of banned outlawed `Sarbahar Party’ was gunned down by unidentified miscreants at a village of Charpara in Pabna sadar upazila on Sunday night.

The incident took place at around 9pm on the spot in Pabna sadar upazila’s Ataikula police station.

The deceased was identified as Belal Hossain, 35, son of Mohammad Abdul Karim of Charpara Purbapara village. He was a active activist of of the banned extremist group `Sarbahar party’ locals and police said.

Quoting locals, officer-in-charge of Ataikula police station,  Jalal Uddin said Belal Hossain was going to his village home on a motorcycle from Pabna town at aroundt 9pm. Just before reaching home, the miscreants shot him dead and fled leaving his body in a nearby jute field.

Pabna Additional Superintendent of police Masud Alam said police reached the spot and recovered the body and sent to Pabna Medical College Hospital morgue for autopsy. Police could not confirm who killed him and for what reason. 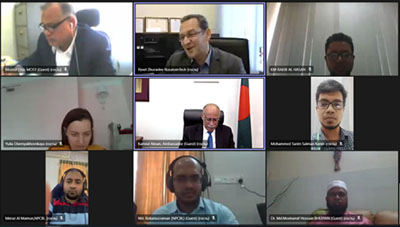