Two drug dealers arrested with 30 pieces of yaba in Bogura 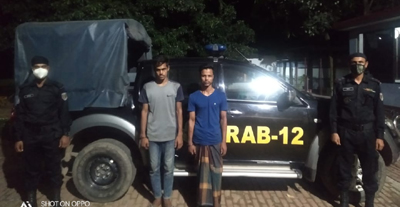 The operation was conducted at Ranirhat Bazar under under Shajahanpur Police Station in the district. The arrested are identified as Md Zahid Hasan (20), son of Md Jahanur Alam of Jamgram (Barbaria) village and Md Sohail Rana (25), son of Md Nazimuddin (Thandu) of Jamgram (Lyabari) village.

The arrested drug dealers have been handed over to Shajahanpur police station for taking legal action against them.

Lt. Commander Abdullah Al Mamun, company commander of the camp, said such anti-drug operations by the RAB would continue and would be intensified in the future. We firmly believe that such activities of the law enforcement agencies can make Bangladesh a crime free country.