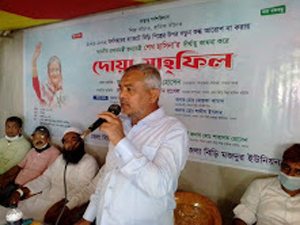 The leaders of the district Bidi Industry Owners’ Association and Bidi Mazdoor Union expressed their gratitude to Prime Minister Sheikh Hasina for not proposing to increase the duty on bidi industry in the proposed budget for the fiscal year (2021-2022.)

The speakers demanded an additional Tk 4 reduction in the price of bidis imposed in the last financial year, a reduction of 10 per cent income tax on advances imposed and protection from aggression by multinational companies. Speakers called for an end to step motherly behavior on bidis.

At the end of the discussion, prayers were offered for the recovery and longevity of Prime Minister Sheikh Hasina. Media workers and officials of the organisation were present in the prayer programme.

All the speakers urged to the Prime Minister to declare bidi industry as a domestic cottage industry, declare workers’ wages and form a monitoring committee so that the government can collect taxes with discipline. Press release.