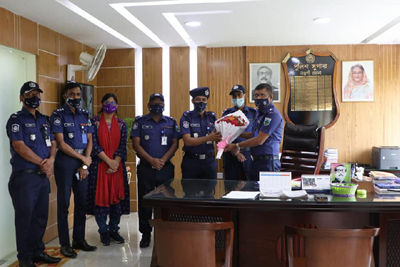 Gaziur Rahman has joined Naogaon district yesterday as Additional Superintendent of Police (Crime). He seeks co-operation from all walks of life to implement the government order smoothly.

After completion of Hons & Masters degree from English literature Gaziur Rahman has become as Assistance Superintendent of Police (ASP) from 29th BCS and joined in DMP. He later performed as ASP headquarters in Bogura and B-circle in the same place with reputation. After getting promoted as additional superintendent of police he worked in Dinajpur sadar circle.

He also joined UN Peace keeping Mission in Sudan and come back Bangladesh and joined in Sherpur circle as additional superintendent of police in Bogura. Now, the talented officer is serving as Additional Superintendent of Police (Crime) in Naogaon.

Before joining Naogaon  district he got more than 30 times best circle officer crest  during his working in Bogura and Dinajpur simultaneously.

He said the love he has received from the common people of Bogura could never be repaid. The success he had in Bogura is actually due to the senior officers and the failure of the common man is only his own.

He is very grateful to all the senior officers and colleagues, including the competent Superintendent of Police of Naogaon district, for accepting him with sincerity.