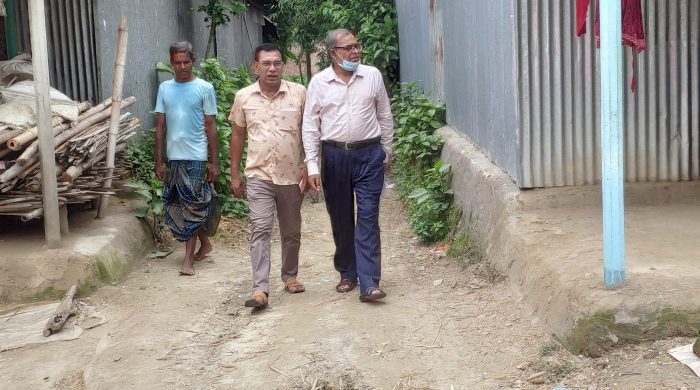 A local resident has demolished a 100-year-old government road and built a house in Ghugarapara village of Bogra’s Dhunat upazila. At least 15,000 families have been affected by this. It is alleged that the locals sought the intervention of the local administration but did not get any remedy.

It has been seen that there is a government road next to the house of Mostafa Pramanik, son of Romjan Ali of Ghugrapara village of the upazila. The road is about 26 feet wide. The locals used to come and go to Dhunat city, educational institutions and markets through that road. Also the farmers of the area could easily transport the crops from the land using the government road. In this situation, Mostafa Pramanik occupied the road in 2016 and built a house.

Due to illegal occupation, all kinds of vehicles have stopped moving on the road. Even now it has become difficult to walk on the road. They lodged a written complaint with the local UP Chairman, OC, Aceland and Upazila Nirbahi Officer on April 24, 2016 to expel the illegal occupants and open the road. On March 12, 2016, at the meeting of the Upazila Law and Order Committee, it was decided to vacate the road. Later, due to the Corona disaster, it was not possible for the administration to implement the eviction. In this situation Upazila Nirbahi Officer and OC were transferred.

In this regard, the former general secretary of the Bogra Bar Association, lawyer Mozammel Haque said, the problem has not been solved by local initiatives. In addition, the occupier has stated that he will not leave the occupied road. All traffic on the 26-meter-wide road has been completely cut off. As a result, the people of Ghugarapara, Madarvita and Arkatia villages are living a miserable life under siege.

Mostafa Pramanik, an illegal occupant, said, “I did not vacate the house by occupying government roads.” Even then, after measuring the place, if the house is lying inside the government road, I will give up the possession.

Dhunat Upazila Nirbahi Officer (UNO) Sanjay Kumar Mohant said, “I was not informed about this after I joined this workplace. Necessary steps will be taken with new research.