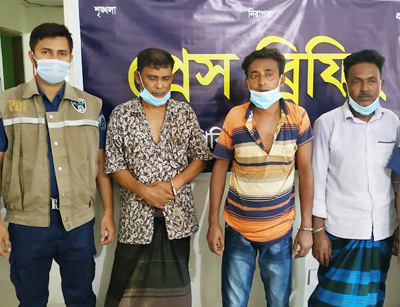 The personnel of Police Bureau of Investigation (PBI), Bogura have unearthed the clueless Shaheen murder case after a serious investigation in the 2 and half years and arrested four killers in the connection of the murder.

The deceased was identified as Shaheen, 40, son of late Ledu Mondal of Kheuni Binnacapor village under Shibgonj upazila of Bogura.

Case statement said that the cohorts of the deceased Shaheen planned to kill Shaheen and wanted his dead body in the house of physically sick Akter Hossain allise Bulu, the maternal uncle of the arrested Ripon Sardar dor the greediness of his 9 bigha of land in the area.

Following their plan, they entered into the house area of Aktar on June 10, 2017 night for the theft of cattle and strangulated Shaheen to death and left his dead body in the house and later police recovered his dead body and deceased’s wife Nur Banu filed a murder case with Kahaloo police station in Bogura and after a long investigation, police could not trace out the killers and after giving final report, the court handed the case to PBI, Bogura for further investigation.

Later PBI led by Superintendent of Police (PBI), Bogura Akram Hossain Biswas, has conducted huge investigation targeting many matters and at a stage, arrested Tara Mia and Ripon and Ripon gave state before the court of Senior Judicial Magistrate Momin Hasan confessing the killing and on his confession, PBI later arrested Shahrab and Papon and ordered three days remand of Tara Mia who is now under the remand.

Akram Hossain Biswas, The Superintendent of Police (SP) of PBI, Bogura said that the PBI personnel have tried their best to trace out the killers of the clueless murder of Shaheen and finally succeeded though it was totally clueless and PBI has been doing such successful investigation of the serious cases across the country.