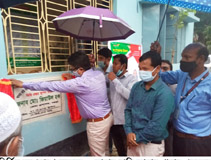 The building was constructed at a cost of around Tk 3.59 crore under the supervision of the Local Government Engineering Department. The Deputy Commissioner also unveiled a plaque for the construction of an expanded two-storey building at a cost of Tk 10 lakh by the Upazila Amar Bari Amar Farm Project and Palli Sanchay Bank.

Later, the Deputy Commissioner distributed sewing machines, fans and footballs to various educational institutions among the destitute, helpless and divorced women with 3% ADP funding from the female vice chairman.