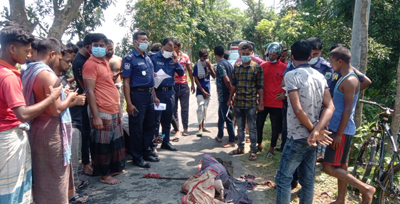 The deceased was identified as Fatema Khatun,20, daughter of Abdul Quader of Shambhupur mahalla under Bera municipality in the district and her husband Rakibul Islam,25, son of Chandu Sheikh of Feshuan Mahalla of Santhia Municipal area.  Police arrested Rakibul Islam, 25, for allegedly strangling Kaniz Fatema to death.

Police said Rakibul killed his wife on the night before Eid on May 13 and hid her in a water hyacinth in a river canal.

Pabna Additional Superintendent of Police Masud Alam (Crime Division) said quoting the family, Fatema Khatun got married to Rakibul seven months ago. After marriage, their monogamy and family quarrels were going on. On April 28, Rakibul left his wife Fatima at her father’s house.

Meanwhile, Rakibul planned to kill his wife. On the eve of Eid, on Thursday (May 13) evening, Rakibul told his wife Fatima on her mobile phone to go out of the house. Rakibul also forbade anyone to tell his family about leaving. Then he took Fatima on a motorcycle to Karamja Bridge in Santhia Upazila.

After a while, Rakibul strangled his wife Fatima by wrapping a scarf around her neck. Later, Rakibul hid Fatima’s body in a water hyacinth in the canal of Ichhamati River on the side of the road.

However, while leaving the place, Rakibul sent a message to his own phone and to Fatima’s brother’s phone saying, “Excuse me, I have a relationship with another boy, so I left.”

Unable to find his daughter, father Abdul Quader filed a missing diary with Bera police station in the evening on Friday. Police arrested Rakibul on that Friday night. Rakibul told the police that he did not know anything at first. He also told the police about his wife’s message. After that the police became suspicious. He confessed to killing his wife at one stage of the interrogation. According to her confession and information, police recovered Fatima’s body from the river canal at around 10.30am on Saturday.

The body was sent to Pabna Medical College Hospital Morgue for post-mortem examination. Officer-in-charge of Bera police station, Arvind Sarkar said preparation underway to file a case in the incident.