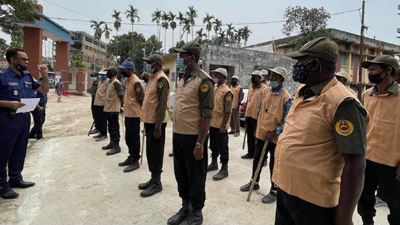 Gobindaganj Thana police led by officer in charge(OC) AKM Mehedi Hasan deployed as many as 25 ansar members on the highway which is located in the e Gobindaganj Municipality and its important places today.

The objective of the ansar deployment on the highway of the municipality is to eliminate the traffic jam caused by various vehicles.

Today morning, OC of Gobindaganj Thana AKM Mehedi Hasan briefed the ansar members on the Thana premises about their responsibility on the highway of the municipality areas so that no traffic jam occurred in the municipality creating the hampers on the movement of the common people.

Talking to the correspondent, OC Hasan said they would perform their duties on the highway under community policing banner till Eid-ul- Fitr.

The upazila town dwellers highly lauded the initiative of the OC for deploying the ansar members in the upazila town before the Eid-ul- Fitr aimed at avoiding the traffic jam.