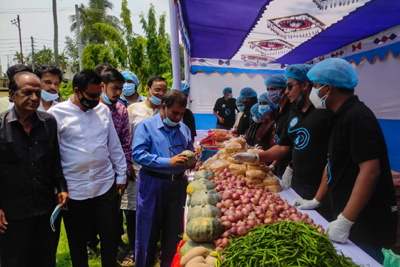 AkTakar Bazaar (Bazar of One Taka) was opened on the premises of Gaibandha Govt. Girls’ High School of the district town this morning amid much enthusiasm to the concerned.

AmaderGaibandha, a non-profitable organization formed by the students of Gaibandha organized the bazar for the poor and helpless people who were affected from Covid-19 pandemic in cooperation with GaibandhaZillaParishad(ZP).

This morning around 11 am an inauguration function was also held on the school premises with Sayham Rahman, president of the organization, in the chair.

Chairman of Gaibandha ZP Ataur Rahman Sarker Ata attended the function and addressed it as the chief guest and Fulchhariupazila chairman GM SelimParvez was present as the special guest.

Speaking on the occasion, ZP chairman Ata in his speeches highly lauded the initiative of the organization aimed at providing edible food items for the corona affected people to help them celebrate the Eid-Ul-Fitr.

He also thanked the students of the organizations for arranging the bazar for the poor as such type of initiative would help the students grow the sense of humanity from the student life.

He also asked the students to be more serious in study and make good results in the exams to be worthy citizens of the country so that the students of the organization could lead the country towards desired development side by side with conducting humanitarian activities for the poor and neglected people of the society.

Monira Begum of Chalkmamrojpur area said like other customers she is very happy as she got 13 food items at one Taka from the organizations before the Eid festival. She also expressed her gratefulness to the organizers of the bazar.

A large number of people, town elite, volunteers, members of the organization including journalists of print and electronic media were present on the occasion.