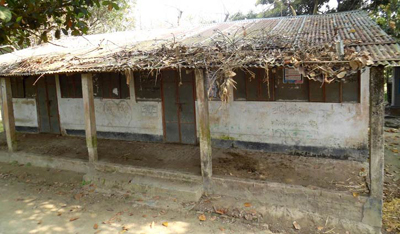 According to the Sujanagar upazila Project Implementation Office- the community center was built in 1999 with funding of the government’s shelter project and under the supervision of the army to facilitate the gathering of the people of the Bhina shelter.

Yunus Ali, a local resident, said that in early days of the construction of the center, the asylum seekers used to gather there from time to time. Of course at that time there was a regular committee to manage the asylum seekers. Under the leadership of that committee, the asylum seekers used to live an orderly life and from time to time they used to sit in the community center and take various action plans to improve their lot. But after 5/6 years, the activities of the center of that committee came to a standstill due to unknown reasons. At the same time, the meetings and gatherings at the community center were closed.

In this regard, Bhina union parishad chairman Amin Uddin said, although the community center was built with government funding, it is responsibility of the shelter residents to take care of it. But due to their indifference and negligence of duty, environment of the shelter project including that center is being ruined.

Sujanagar Upazila Nirbahi Officer (UNO) Raushan Ali was called several times to talk to him about the matter but he did not receive the call.