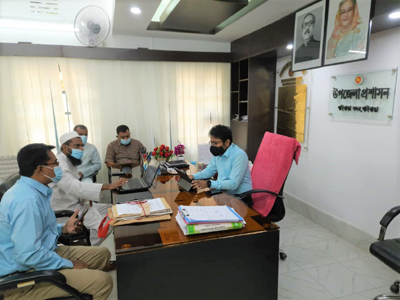 As the government had given the farmers chance  to sell their paddy to the food department this year, as per the directives of the food department the interested farmers applied for registration to the respective upazila agriculture offices of the district through the apps of the farmer namely “Krishoker App” for selling their paddy at fair prices fixed by the government.

Today, the activity of farmers’ selection through lottery was held at the office room of Sadar UNO of the district town. The lottery was held in presence of UNO Md. RafiulAlam, food officials and staff, the upazila level officials, public representatives, farmers and the media men.

Similar, lottery system to select the registration numbers of the farmers was also held at the office room of Gobindaganjupazila administration today and 4222 farmers were selected to sell their paddy, said Swapon Kumar Deyupazila controller of food.

Talking to the correspondent district controller food MdReazur Rahman Razusaid, the Boro paddy procurement drive might be started in Gobindoaganjupazila or Sadarupazila in the district tomorrow or day after tomorrow.

Within few days the activity of farmer’s selection through lottery would be finished, he concluded.