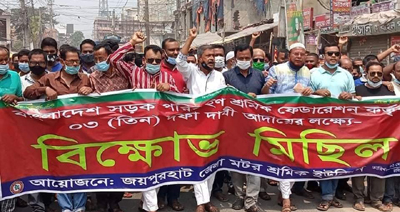 Workers of Joypurhat District Motor Workers Union have staged a procession and rally demanding the introduction of public transport in compliance with the health rules. The protest marched out of the city’s Zero Point at around 11 a.m. on Sunday, ending its march around the city.

Speakers said the government has announced a lockdown to save lives in Corona. We are not against lockdown. However, in this lockdown, there was talk of human movement, hat-bazaar, educational institutions, court-kachari being all closed.

Accordingly, we had no objection if public transport was closed. But it is seen that garments, shopping malls, raw markets, office courts are running as the lockdown has been relaxed on the condition that everything is in compliance with the hygiene rules.

The speakers also said that 6,000 workers have lost their jobs in the district due to the closure of public transport. They are living a dehumanized life as their way of earning is blocked. They demanded the introduction of public transport with half the passengers in compliance with the health rules, financial assistance and food aid to the workers and arrangement of selling rice at Tk 10 for the workers.