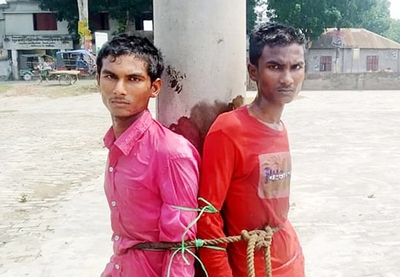 Failing to get expected job after paying bribe angry job seeker along with three other job seekers killed housewife Mukti Khatun Rita, 27 in her home at the village Mushuriapara in Ishwardi upazila of Pabna on Thursday, three suspected killers of the housewife stated to the court under the section 164 police said.

Of them Sabbir paid Tk. 70 thousand to the victim for getting job in the project of Tk. 30 to 35 thousand wages range but he did not get his expected job even he did not get back his money so he became angry, the OC said quoting the arrestee.

Sabbir along with other three job seekers came to her house on Thursday noon when the victim was staying alone with her mother in law. They strangled her and stabbed her ensuring her death in the home, the OC said quoting the arrestees.

Police however arrested three of them also seized knife used in the killing and trying to nab other accused, the OC said.

“During interrogation the arrestees confessed their involvement of killing the housewife saying they have killed for taking revenge of not getting expected job in the Rooppur Nuclear Power Plant after paying bribe money to Baizid couple and even return of the money.” The OC said quoting the arrestees.

Senior judicial magistrate Ashraful Islam however recorded their statement under the section 164, the OC said. The arrestees however sent to jail on Saturday.

Police arrested the key accused and revealed clue behind the killing within 48 hours of the incident, the OC claimed.