Three members of Agyan Party arrested at Mithapukur in Rangpur 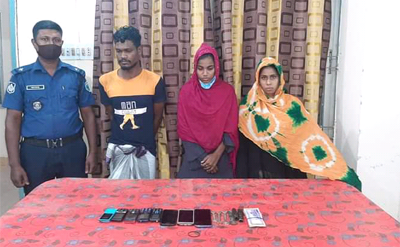 Police have arrested three members of Agyan(unconscious)  Party in Rangpur’s Mithapukur. Charger rickshaws, battery-powered autorickshaws, motorcycles and mobile phones along with Tk 50,000 in cash were seized.

They were arrested in a raid in Bhangni area of ​​the upazila on Wednesday night (April 28). They are Nur Alam alias Tarek alias Sagar alias Rana, son of Abdul Wahab of Kishamat Jalal village of Kafrikhal union in Mithapukur, Sathi Akter Sumaiya(16) daughter of Rashid Bepari of Kismat Srinagar village of Mirzaganj police station of Patuakhali and Akter Sumi (20), daughter of Swapan Jamardar of Shakbunia village.Rangpur District Police Mithapukur-Pirganj (D) Circle Assistant Superintendent of Police (ASP) Kamruzzaman said that on March 12, Abdur Razzak(40)a motorist from Padmahar village in Pirganj, lodged a complaint with the Mithapukur Police Station alleging that he had stolen an autorickshaw after consuming sleeping pills with juice.

He mentioned in the complaint that he went to Chatra Bazaar with his autorickshaw on March 8 at 11 am. At that time four passengers rented his autorickshaw to go to Dinajpur. Later they went to Nawabganj Bazar and had lunch at a hotel. Then they all came to Vendabari and ate juice with the driver. At this time, he was fed sleeping pills mixed with juice. He became unconscious.

After losing consciousness, the gang threw him in Ranipukur area under Mithapukur police station and fled with his autorickshaw. Later, the locals admitted him to Mithapukur Upazila Health Complex(MUHC). He added that the police started investigation on the basis of the allegations. Meanwhile, news came from Bhangni Bazar area of ​​Mithapukur on Wednesday evening that the locals had arrested two women while trying to snatch an autorickshaw after consuming juice. Upon receiving the news, Mithapukur police rushed to the spot and arrested the two. The shocking mystery of the autorickshaw theft came out soon after their arrest.

Those whom the police have been looking for for a month and a half are members of that gang. After questioning them, the party’s leader Nur Alam alias Tareq alias Sagar alias Rana was arrested at night from Sultan area of ​​Rangpur city. According to their information, a charger rickshaw, two battery-powered autorickshaws, a motorcycle, seven stolen mobile phones, taka 50,000, four ranges used in the theft, a pipe range and two star ranges were seized from their custody.
Kamruzzaman said that during the preliminary interrogation, it was learned that the main planner of the group was Nur Alam. They first hire charger rickshaws, autorickshaws or motorcycles for commuters. After a good relationship with the driver, he (the driver) is fed a mixture of sleeping pills with juice. After that, when the driver became unconscious, he was left in a convenient place and fled with the charger rickshaw, motorcycle, autorickshaw, mobile, money and other valuables.

They then handed over the items to a young man named Hasanuzzaman alias Hanif alias Kalu (28). Hanif used to change the color of them and sell them and pay the money owed to the members of his group. They have confessed that they have done such work for 15-18 times for about four months. A case has been filed against them at Mithapukur police station, the police official said.