25,186 Metric tons of Boro Paddy is Expected to be procured in Bogura 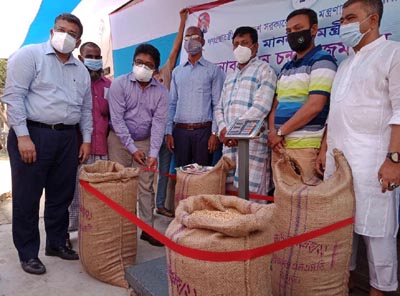 Bogura district is going to procure at least 25,186 metric tons of Boro paddy under the supervision of District Controller (DC-Food) office in the current fiscal through mobile app and the procurement activities were inaugurated by the Deputy Commissioner (DC) of Bogura Ziaul Hoque in Bogura yesterday.

DC Food office sources said that in the 2019-2020 fiscal, the procurement of the Boro paddy was started through the mobile app under Piloting Porgramme in the sadar upazila of Bogura like other 14 upazilas across the country. In fiscal of 2020-2021, the government introduced the mobile app procurement system in the 64 upazilas of 64 districts.

But this fiscal 2021-2022, out of 492 upazilas, 210 upazilas have been included in the procurement process through mobile app. 12 upazilas of Bogura have been listed under the mobile app-based procurement process and the application for selling the Boro paddy has been started so far and it will be continued till 10 May instant and deadline of the registration has been fixed till 10 May instant too and the registered farmers will be selected though lottery process for buying the paddy, added the sources.

It is noted that 52 Automatic rice-mills, 1,480 husking rice-mills and 43 boiled rice-mills will collect Boro paddy from the farmers, added the sources.

Mohammad Ashrafuzzaman, DC (Food) of Bogura district said that his office does not want to face such bitter experience in the past year and the price-hike of the paddy and rice will satisfy the farmers and millers and the bumper production of the paddy in the current fiscal and the target of the procurement will be fulfilled if there will be no rough weather.