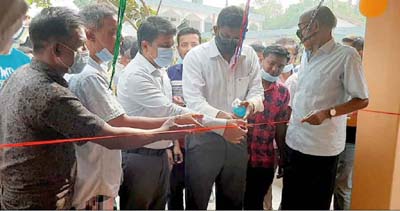 Some 10 families of minority ethnic group of Sona Roy union under Sundarganj upazila in the district got puccahouses from the government free of cost yesterday.

Upazila administration implemented the construction of the houses for the families of minority ethnic group of the upazila with the financial support of Prime Minister’s Special Development Fund, office sources said.

A simple function organized by upazila administration was also held at Saitantola Bazar of the union in the afternoon with UNO Mohammad Al- Maruf in the chair.

Local lawmaker Barrister Shameem Haider Patwary attended the function and addressed it as the chief guest.

Speaking on the occasion, local lawmaker Barrister Shameem Haider Patwary said, the government led by Prime Minister Sheikh Hasina had taken up an initiative to provide brick built houses for the landless and home less including the families of minority ethnic group of the country to improve their living standard in the society.

Accordingly, the houses are being built for them across the country he said adding that her government would ensure accommodation for all marking the Mujib Year, officially termed as MujibBarsho, the birth centenary of Father of the nation and architect of the Independence Bangabandhu Sheikh Mujibur Rahman.

Later, the lawmaker formally handed over the houses with its ownership documents to 10 families of minority ethnic group of the union as the chief guest.

UNO Mohammad Al- Maruf in his speeches said a total of 20 houses are being built for the families of minority ethnic group of the union. Of them, 10 houses were distributed, the rest houses are in under construction.

With the completion of the construction of houses, they would be handed over to the selected people of minority ethnic group of the upazila without delay, he concluded.

After getting the houses from the government free of cost, all beneficiary families expressed their gratefulness to the government and PM Sheikh Hasina for standing beside them with brick-built houses to live there peacefully.