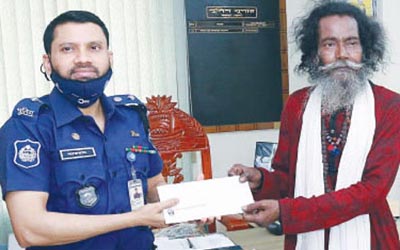 Due to the Corona pandemic-hit, the Boul artist has fallen in the deep sea of utter desperation. Hearing his bad condition of the family of the popular Boul, DIG of PBI extended his kind hands with financial help at Tk. 25 thousand from his own fund.

On the direction and finance of the DIG, the Superintendent of Police (SP) of PBI, Bogura Akram Hossain Biswas has handed over the money to the Boul Artist in his office.

Akram Hossain Biswas said that the honourable DIG of PBI sir was informed through mass media about his worst financial condition of the popular Boul Artist and wished to donate the artist and he has handed over the money in favour of DIG, PBI.

Besides, during the handover of the donation money, with the assistance of ACI Motors Limited, the Officials of Bogura Yamaha Riders Club have also donated the famous Boul artist in the same programme.

It is mentionable that two years back, the fame of the Boul Artist was burst out with the singing of the song ” Bolbo Na Go Ar Konodin Valo Basho Tumi More” and it became viral through social media and millions of viewers viewed the song within few months through You Tube Channel but the pandemic fell him in the utmost despair of life and it was published in the mass media and on hearing the ill-condition of the artist, DIG, PBI and other officials came forward to donate the money.