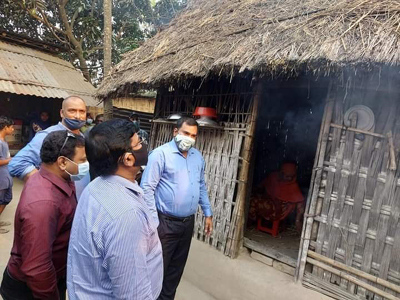 A miraculous fire is burning in a village in Thakurgaon. Some 20 families are living in panic due to such incidents. The incident took place in Sabajpur village of Charol union in Baliadangi upazila of Thakurgaon district.

The families of the victims claim that miracles are miraculously set on fire 3-4 times a day in different parts of the house. Sometimes in the kitchen, sometimes inside the cloth trunk, sometimes in the house. In the last 20 days, the houses of 20 families have caught fire more than a hundred times. The villagers have already installed several electric pumps to put out the fire.

Thakurgaon Deputy Commissioner Dr KM Kamruzzaman Selim visited Singia village in Baliadangi upazila of Thakurgaon on Tuesday. He spoke to the owners of the damaged houses.

Deputy Commissioner Dr KM Kamruzzaman Selim spoke to all concerned. He asked the UNO and the OC to provide round-the-clock security by keeping one village policeman in each house.

He informed them that if the matter is not resolved, the team of the concerned department will come from Dhaka. Later, the deputy commissioner distributed 3 bins of tin and Rs 9,000 cash to each of the 10 affected families.