Police unveiled the mystery of the murder of a sensational schoolgirl in Mithapukur, arrested-1 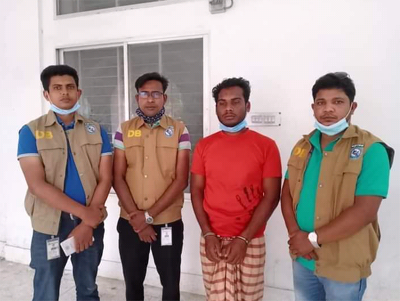 Mithapukur police have unveiled the mystery of the murder of Moslema Khatun (15) in Rangpur’s Mithapukur. Police arrested the killer within 12 hours of recovering the body and sent him to jail through a wise court.

The detainee was the boyfriend of the slain Moslema. He is identified as Nahid Hasan, 22, son of Jahangir Alam of Dalsinghpur village in the upazila. A vigilant team of police conducted a special operation and arrested Nahid involved in the incident within 12 hours. The police sent him to jail through the court on Sunday.

According to police sources, Moslema and Nahid were cousins. At one stage a love affair developed between them. Due to that love affair, the two have a physical relationship more than once. The last time they had a physical relationship was last December. Nahid then joined the service in the neighboring district of Dinajpur. 15 days before the incident, Moslema informed her boyfriend Nahid that she was pregnant. But when Nahid denied the matter, there was a rift between the two.

Then Moslema contacted Nahid on her mobile phone and asked to meet her. Incidentally that
When the two met in a corn field, Nahid refused to allow the pregnant Moslema to have her baby and pressured Moslema to ruin the baby. When she disagreed, at one point Nahid became agitated and killed Moslema by wrapping a scarf around her neck in the corn field.

After the incident, Nahid returned home and started living a normal life. But Nahid was not the last to be saved. He was arrested in a special police operation.

Rangpur District Senior Assistant Superintendent of Police (D-Circle) Kamruzzaman said, the arrested accused has been sent to jail after recording his confessional statement through a wise court.