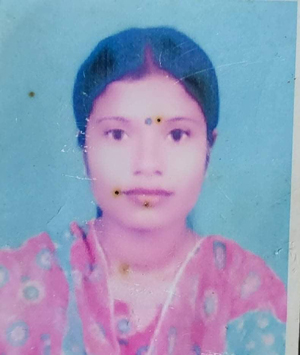 Masuda is sitting on the verandah of her house and crying for her husband Altaf Hossain. Altaf, 35, died when the Rana Plaza in Savar collapsed. Masuda herself was injured at the time.

April 24 marks the eighth anniversary of the Rana Plaza collapse. He could not forget those sad memories for so many years. Husband’s longing for survival is still eating Masuda.

Masuda is a resident of Balidbara village in Thakurgaon Ranishankail upazila. Apart from Altaf, two other women garment workers, Akhter (23) and Anju Begum (28) of the same village, were killed in the Rana Plaza collapse. Recently we talked with the three families who lost their relatives. At that time, the word of the day with terrible misery came up in their words.

Masuda said April 24 was the day of the Rana Plaza collapse. How could I forget that day! As soon as he spoke, he ran home. He took a picture of Altaf in his hand. By then Altaf’s son Masud Rana (18) had come there. Then Masuda started talking about this boy.

The boy was diagnosed with heart disease from birth. So in September 2012, both of them started working in a garment factory at Rana Plaza in Savar with the help of a local. Leaving the children with their grandparents, they went to Savar. Husband and wife used to earn 12-14 thousand rupees per month. At the end of the cost, he would send the rest home.
Husband Altaf Hossain worked on the seventh floor of Rana Plaza and Masuda on the third floor. The building collapsed on April 24, 2013 at 9:30 am. Masuda was rescued around one o’clock in the afternoon. Masuda, who suffered a chest injury, was taken to Enam Medical College Hospital.

But after two hours, Masuda left the hospital and came back to the rubble. But she could not find her husband. Injured Masuda fainted at around 7 pm. The locals grabbed him and brought him to his rented house. There, at around 8 pm, Masudar’s mobile phone received a call from a worker trapped inside the collapsed building.

He told Masuda that Altaf was stuck with beams on his hands and feet. From there he just repeatedly says Masudar’s name. The trapped worker requested Masuda to rescue him and Altaf.

On that day, Masuda ran into the rubble and entered the collapsed building with the help of an army member. Knowing her husband’s position, she started shouting. At one point the husband also responded. At that time Altaf cried and cried.

Altaf then cried, “Even if you cut your hands and feet, cut them.” Mui begs and eats. I can see Chawalak too. ‘Going closer, Masuda put her hand on her husband’s face.

Rescuers were repeatedly chasing Masuda out. Then Altaf told him to go with a little water in his mouth. Masuda returned to the rescue squad with the promise of rescue with water in her mouth. Altaf died on April 25. His body was recovered on April 26.

Masuda started crying while saying the words. Later, Masuda managed to say that the boy was no longer educated. Seeing the hardships of the world, he himself started working as a mason. And trying to teach the girl. Masuda said the family received Tk 20,000 when Altaf’s body was taken and later received Tk 100,000 from the Prime Minister.
I got up from Masudar’s house and went to the house of artist Akhtar and Anju Akhter of the same village where Rana Plaza collapsed. Their family members could not forget the sad day.

Shefali Begum, 45, the artist’s mother, said the artist was studying for a degree in a factory. A well-known Rana Plaza in the area reported the collapse. Hearing this, the artist’s father got into the car in Dhaka. After much searching, he returned without finding the girl. Shefali broke down in tears as she spoke.

He stopped crying and said again, 16 days after the Rana Plaza collapse, a villager informed him on his mobile phone that the artist’s mobile number was open. That’s when he called his daughter’s number. A woman picked up the phone. Hearing the woman’s voice, he thought the artist was alive.

Faizul Islam (55), the father of the artist, said, “I said, ‘Artist, where are you?’ Narikantha from the other side says, “I am not an artist. The artist’s body was found. Later, the body of the artist was handed over from the ground of Adharchandra Vidyalaya. ‘Faizul said, the artist has become almost a skeleton in those days. I recognized him by looking at his long hair and ring. The girl was so lazy, I can’t forget her at all.

The artist’s younger brother Sohail (21) said, I was very young then. But I can’t forget the pain of my sister going like this. Shefali, the mother of the artist, said that the government has given one lakh rupees for the death of her daughter. So he took some mortgage for the boy.

Meanwhile, Anju Begum got divorced from her husband after a few years of marriage. Thinking about the future of his son and daughter, he left them at his father’s house and went to work in a garment factory. He used to send a part of his salary every month.

The family lived on that money. Anju also died on the day Rana Plaza collapsed. His sister Buli Begum (40) said that the whole family depended on the money sent by Anju. Since his death, the family has come down to poverty. Thinking of the shortage, Anjur’s daughter Mausumi (15) has left for Narayanganj to work in a garment factory. Son Raju (11) says, I look at my mother’s picture again and again to remember my mother’s face.

The family also received Rs 20,000 for burial and later Rs 100,000 from the Prime Minister, said Anjur’s father Abdul Mannan, 60.
“I don’t have a good boy,” he said. He covered his face with both hands when Anjui said that there was a boy near me, tears flowed from the gap between his fingers.