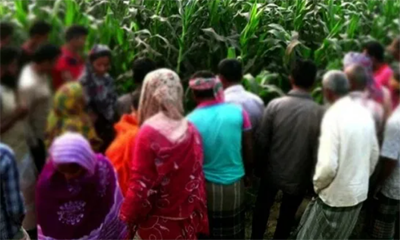 Police recovered the half-decomposed body of a teenager named Moslema Khatun (15) from a corn field in Rangpur’s Mithapukur at 8:30 pm on Saturday and sent it for post-mortem.

It is learned that Moslema went missing after leaving home last Thursday afternoon. Family members searched for her but could not find her. Later, the family filed a general diary (GD)at Mithapukur police station.

On Saturday evening, a bad stench began to come from a corn field next to Moslema’s house. The locals went to the corn field to see the half-decomposed body of Moslema. Upon receiving the news, the police recovered Moslema’s half-ddecomposed  body around 8:30 pm on Saturday and sent it to the morgue.

Mithapukur Police Station OC Amiruzzaman said, a girl named Moslema Khatun from the corn field
has been recovered. The body was sent to the morgue of Rangpur Medical College Hospital (RMCH)for postmortem.