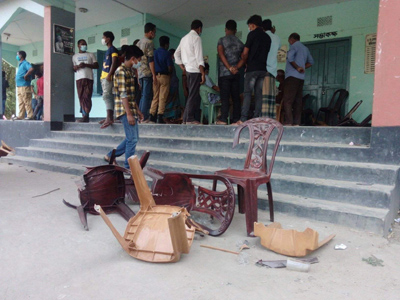 A case has been filed in connection with the terrorist attack on Dholarhat Union Parishad No. 21 under Thakurgaon Sadar Upazila Ruhia Police Station.

On April 21 (Wednesday), the chairman of the union, Simanta Kumar Barman Nirmal, filed the case with the Ruhia police station, naming nine people and accusing 20 others. Police have arrested Nur Hossain, 35, the main accused in the case.

The plaintiff in the case, Dholarhat Union Parishad Chairman Simanta Kumar Barman Nirmal, said that a scuffle broke out between Sudip Chandra Barman and Nur Hossain on April 20 (Tuesday) at a local Dholar Hat Bazaar. When the Union Parishad sat down to settle the incident, foreign terrorists on Nur Hossain’s phone came and attacked the Union Parishad. He added that the attack damaged many government properties in the union. I demand exemplary punishment for these terrorists.

Ruhia Police Station Officer-in-Charge Chitta Ranjan Roy said a case has been registered against the Union Parishad for assault and vandalism. A man named Nur Hossain has been arrested in the case. The case is under investigation and the operation to arrest the remaining accused is on.