Upazila administration working relentlessly to implement the lockdown in Sapahar 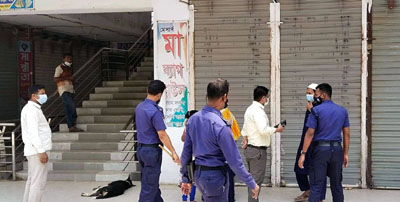 The upazila administration has been working relentlessly to implement the strict lockdown announced by the government in Sapahar in Naogaon.

On the 9th day of the severe lockdown on Thursday, Assistant Commissioner (Land) Sohrab Hossain conducted campaigns in different markets and points of the Upazila Sadar to protect the health of the people and as per the government announcement.

“The global epidemic of corona virus is spreading rapidly, so we are conducting this campaign to make the people obey the government laws and raise public awareness so that the infection in our upazila can be reduced and the disease can be prevented,” he said.

Abdullah Al Mamun, a newly joined Upazila Nirbahi Office, is also visiting various corners of the upazila and distributing masks to the people at home as well as for health protection.