Way reformed by self work in Dhunot 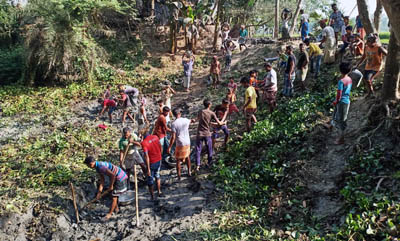 The two-kilometer-long dirt road at Dhamachama-Majbari village in Nimgachhi union under Dhunat upazila was vandalized in Bogura. When it rains, the broken part becomes monotonous in mud and water. As a result, 6,000 people from four villages suffered while traveling on this road.

The locals went to the people’s representatives several times to alleviate the suffering. But it did not work. So they came forward to solve their own problems. Hundreds of people of various classes and professions including students, businessmen and farmers took part in the road repair work.

On Tuesday morning, it was seen on the spot, a basket in someone’s hand, a spade in someone’s hand. The soil is being cut with a spade and filled into baskets. And these baskets are being thrown on the broken parts of the road.

People from a few local villages are doing this. This work is going on from Monday. Most of the road has been filled with soil and raised two to three feet. This work may take another three to four days to complete.

Villagers engaged in road repair work said that many parts of the road have collapsed and merged with paddy land. Despite being aware of this predicament, no action was taken to repair the road. He demanded the UP chairman and members to repair the road but said it could not be done due to lack of allocation. However, the work on this road could have been done easily through the 40-day job creation program or LGSP project.

Abdus Salam, the initiator of the road repair work, said there was no end to their misery due to the dilapidated roads. In this situation, the villagers have taken initiative to reform the voluntary ashram. The work will be completed in three or four days. However, protection walls are needed in a few places to protect the road from erosion. If this work is done officially, then the road will not break easily.

Munnu Mia, a member of Ward No. 9 of Nimgachhi Union, said, “I have heard that the locals are doing road work in the voluntary ashram.” I have requested the chairman many times in allocating projects for road works. But it didn’t work.

Azahar Ali Paikar, chairman of Nimgachhi Union Parishad (UP) in Dhunat upazila, said work on the road could not be done due to limited allocation. However, steps will be taken in this regard later.