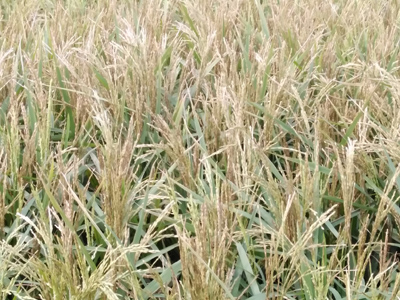 A huge quantity of standing crop Boro paddy was badly damaged in five upazilas out of seven in the district when heat stretch swept over the paddy fields recently.

Department of agricultural Extension (DAE) office sources said on April 04, a gust of wind with heat stretch started in the afternoon around 2,45 pm and it lasted over an hour. As a result, the standing Boro paddy on 1055 hectares of land badly damaged making the paddy growers more worried about their food security but the number of the affected paddy land might be more.

The standing paddy looks fair from the distant places but whenever one goes to the affected paddy land it is found that the grains of paddy dried up.

In some cases, the sticks of the paddy were lying on the ground due to squally wind swept over the upazilas.

For this, the farmers who cultivated Boro paddy after taking loans from the banks or NGOs are badly affected in the midist of Corona pandemic situation.

Due to the damage of Boro paddy many of the farmers became destitute.

Like other affected farmers, Aminur Rahman, a farmer of Baroboldia village under Malibari union of Sadarupazila said, he cultivated Boro paddy on 3 bighas of land with the hopes of getting desired output against the crops during the current Boro season but his all hopes and aspiration dis-arrayed when the recent heat-stretch and stormy wind swept over his Boro paddy land.

After the incident, when he goes to his destroyed paddy land he cannot not but crying.

Lal Miah, another farmer of the village said, after the taking the lease of a plot of paddy land from another he cultivated Boro paddy om the land.

But a cyclonic storm that swept over the village smashed his standing paddy within in a minute, he added. As a result, he became destitute, he further added.

His family consists of 6 members, he said adding that this nor’ wester not only lost the favor of his fortune but also lost he favor of fortunes of so many farmers of the locality.

Talking to the correspondent, deputy director of the DAE agriculturist Masudur Rahman confirmed the damage of Boro paddy fields in the district on April, 04 due to a gust of wind with heat stretch.

In reply to a query he said, an initiative has been taken to provide govt. incentive to the affected farmers of 5 upazilas of the district.

Accordingly, a list of affected farmers is being prepared by the field level sub assistant agriculture officer (SAAOs) of the DAE, he concluded.